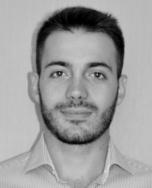 In the present work large-eddy simulation (LES) of generic fully happended (FH) BB2 submarine is performed. Reynolds number is equal to 9.57 E06. Numerical simulations are carried on using the open-source customized OpenFOAM library. The Lagrangian dynamic sub-grid scale (SGS) model is used together with near-wall models to compute the unsteady three dimensional flow, on hybrid mesh. Several numerical works have been carried out on BB2 geometry so far, mainly solving the Reynolds averaged Navier-Stokes equations (RANS); Few highly computationally intensive LES works are present in literature [1], [2]. LES provides the possibility of better understand the transient nature of the stratified flow over a submarine, including transient wake flow, induced noise and vibrations. All these works are developed under the hypothesis of absence of stratification. From recent works [3] we know that the quasi-cylindrical isotropically oriented tubes originated from a flow over a sphere, in case of reasonably high level of linear stratification, are replaced by flattened tubes that are horizontally oriented. In a more complex flow and geometry, like it is, where different dynamics are continuously influencing each other, the effect of stratification may lead to significant modifications in the foot-prints the submarine leaves behind. During this academic year mostly the effort has been focused on the generation of hybrid grid, for both FH submarine and only hull (to perform testes), on the calibration of numerical methods, turbulence RANS model and LES SGS model. Several numerical experiments has been carried out also on turbulent channel flows using LES.

[2] A numerical investigation of the wakes of an antisymmetric body with appendages. Posa, Balaras

[3] On the vortex dynamics of flow past a sphere at Re = 3700 in a uniformly stratified fluid. Chongsiripinyo, Pal, and Sarkar